This past weekend, we had the great pleasure of joining family and friends – new and old – at the wedding of my niece Leah and her fiancé (now husband) Perek.

It was a joyous, festive ceremony in Decorah, Iowa, at a lovely little Lutheran country church just outside of town. But, of the many great memories that I know I’ll cherish, one that was entirely unexpected was from the informal, noon-time lunch preceding the wedding.

As it turns out, we were joined by the church’s Pastor and, in conversation, he began telling us the story of the church’s unique relationship with a 19th century artist, Herbjorn Gausta.

Before we knew it, we were on brief field trip to the parsonage where the Pastor said he had something special to show us, concerning an extended stay-over by Gausta in the early days of the church. Up to the second floor our wide-eyed guest party climbed, making our way to the guest room of the parsonage where the artist had stayed over 100 years ago.

As it turns out, Gausta had used the original plaster walls of the room as his personal study canvas in preparation for a major work. These original drawings were on all four walls of the tiny room and had been covered up by at least four layers of wallpaper, through the years. It wasn’t until the parsonage received a major remodeling job in recent years that the Gausta sketches, long since forgotten, were discovered in the guest room.

As we all slowly circled the room, there was something of an aura of calm and timelessness. Standing within inches of these drawings, it was easy to imagine the artist alone in the room at the turn of the last century. You could feel his spirit…creating, dreaming, meditating on the serene pastureland he would have seen then, just as we did now, rolling for miles outside the second-story window.

It was a real treat and ever a reminder to keep one’s self open to life’s little surprises each and every day!

I had a visit yesterday with one of the Austin representatives of Priority Associates. They and Search Ministries put together a great breakfast meeting a couple of weeks ago – over 230 men before 8:00 am in the morning – to hear an inspiring talk by Dr. David Cook, a professional sports psychologist, talk about his practice with famous pro athletes and his personal mission to spread the faith.

Part of this personal mission for Dr. Cook involves his current quest to bring to life a major motion picture, Links of Utopia. One of the things we’re encouraged by is the increasing sophistication of believers like him to use the culture to witness the good news.

George Barna was among the first during the current internet age to research and document the critical importance of employing music, movies, games, the internet, and other modern media to reach children and young adults, where they spend an increasing majority of their waking time.

We couldn’t agree more. That’s our journey here at Faithkeepers – to equip you with inspiration, recommendations, and resources to give your kids (as well as family, friends and colleagues) a chance to add healthy culture to their lives. It’s no different than adding healthy foods to your daily diet.

Speaking of daily diet, we hope you enjoy another in our series of faith stories, this one shot at an Austin Tex-Mex favorite, Maudie’s with a long-time friend, Susan Scrupski.

In her “day job,” Susan is the founder and chief analyst for the 2.0 Adoption Council. There are few positions that one could have more prominent than Susan’s to put you at the pulse of how companies are using the most ground-breaking technologies to make the products and services that shape our culture.

But, Susan is also a mother, community volunteer, passionate advocate for those things she cares about, with a deep spiritual core that she shares in her story. You can get to know her better at her personal website, “Taking it Personal.”   We hope you are inspired by her thoughtful comments, perhap hearing some situations that are familiar to your own life.  Share it with others and, as  always, let us hear from you! 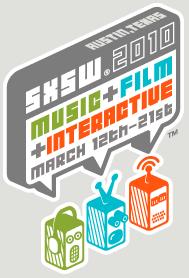 The next ten days are a special time in our hometown of Austin, Texas. For it’s the time of an annual festival referred to as SXSW (said “South by Southwest” or “Southby” by locals) that is one of the biggest events of its kind in the U.S. and many say one of the most significance in the world for the cross-section of new music, internet, and film.

In recent years, film too has grown, due to great efforts by Texas-born film makers, investments by Austin leaders and other developers in studio infrastructure, and the lower cost of producing a film in Texas. It doesn’t hurt that a few high profile celebrities, with recent Oscar winner Sandra Bullock perhaps currently at the top of that list, call Austin “home.”

So, in the light of such a pop culture, media-intense gathering, it is so interesting to observe the picture that one can gather of faith, spirituality, belief at the event.

The good news is that it is by no means absent. For example, there are interviews of a couple of musical acts that have a faith-based dimension to them (in both cases, Christianity) featuring the groups Deer Tick and Superdrag. There is even a music panel on the subject of spirituality, entitled “Spirituality for Nomads.”

You might find the description of the “Spirituality” panel interesting. It says: “Touring has been described as 23 hours of drudgery for every one hour of on-stage high-energy bliss. Life on the road can be exhausting – physically, emotionally, and spiritually. Find practical ways to recharge your batteries and enjoy better relationships with band members and your industry support team.” What a cool theme!

A couple of other faith-based highlights worth mentioning include a nice touch of hospitality by the Southby staff to mention locations for worship within walking distance of the main festival venues (although there are only two referenced and they are both Protestant churches) and the Carver Center’s screening of a program of films for free admission, a couple of which have spiritual subjects.

One film of note is “Little Willie Eason and His Talking Gospel Guitar” (2005), describing how a man of belief takes the stage of the street and a House of God Church south of Miami to highlight the man who introduced the pedal steel guitar as an instrument to express his deep-seeded faith. It’s at 2pm on March 14th, at the Carver Center.

If there is any part of the festival that is a little disappointing (although not entirely surprising) it is the absence of any faith-focused panel or presenter at SXSW Interactive. You would think there would be something along the lines of “Church 2.0” or at least a major mainstream denomination speaker discussing how they are using social media to reach their millions of members. But, nada.

Looking on the bright side, there’s room to grow. And, in that light, I’m looking forward to learning as much as possible at this year’s SXSW festival; maybe we can get faith on the platform in 2011. Meanwhile, if you want to catch my musings through the conference, follow me on Twitter.